I believe it will be something that I will miss for some time.
The lunch ritual in Riverkids starts this way. The cooks (mostly Cambodian men) for the day will start their rounds collecting money from people who will be lunching in during the day, and set off to go to the market to get ingredients for lunch.
The cooks will then return triumphant, loaded with the day’s lunch supplies. Each meal involves different ingredients and food bought, depending on how many people are lunching in (which will hence decide how much money is pooled together). On days where there are many lunch participants, there would be meat and fish bought, and sometimes even dessert (fruits). One unforgettable fruit is a honeydew and avocado-like fruit, which Cambodians dip with sugar!!
What follows next is a one-hour multisensory act that takes place in Riverkids’ kitchen, involving the sharpening of knives, chopping of the day’s kill, whipping of eggs, mixing of sauces, all of which are interspersed with huge doses of bantering and laughter.  This is followed swiftly by fragrant whiffs of the days’ dishes that float up to the second level, into the volunteers’ room where Dawn and I do our work, as we wait for lunch to be served.
When everyone is gathered at the table, the main cook (usually the Education director) will dish out the last dish. Lunch is eaten using a small plastic spoon; while it can be a tricky balancing act using itto eat long, leafy vegetables, one acquires the skill after some time. Bantering goes on all the time, mostly in Khmer, yet seldom do I feel like an outsider.
This is bliss in Cambodia.
Posted by Wei Teng at 23:11 No comments:

I haven’t been writing as much as I would have loved to and there are many reasons for that. Namely, there isn’t much time to do that after a busy day at work, the dim lighting in the hotel room is not supportive of a writing routine, and most of all the living and educational situations I encounter often seem to be beyond what my words can describe.
That said, I shall attempt to write something today, simply because today is Sunday and because I just spent a lovely morning with myself having breakfast at The Blue Pumpkin, a bakery cum café that is just two doors away from where Dawn and I stay along the Riverfront (and where we get our breakfast from almost every day after 8pm when all pastries and bread are sold at 30 per cent discount). 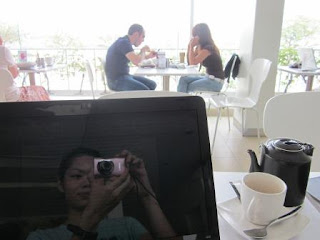 It has been a very productive morning, having done quite a bit of work and read what I want to read, the entire morning interspersed by fascinating observations of couples who come and go (both heterosexual, homosexual and of varying degrees of dubiousness). All of a sudden, I am reminded of what my precocious student N told me to do (call the police) when I see an old Caucasian man with a local child.
I am inspired to do a bit of writing also because of a little entry I just read in a book about Phnom Penh’s historical development.
It appears that before Phnom Penh was known as such, it was called Chatomuk, or ‘The Place of the Four faces’ (ie.looking out towards four directions). This is probably related to the four-faced towers of the Bayon temple at Angkor in Siem Reap.
What a well-given name! It truly captures the sense of openness of the place, I felt, despite centuries since the city was last known as that. Perhaps this is why there are so many NGO (non-governmental ogranisations) here, as observed by Dawn, compared to other developing countries. This open nature that seems to be ubiquitous in its people is something that touches me quite a bit too during my work with the local teachers.
The Cambodian culture which seems to embrace differences was greatly reinforced yesterday too, at a local wedding which Dawn and I were invited to (much to our delight!) We had much fun and experienced for ourselves the warmth of total strangers we do not know. Though we were absolutely deficient in the department of proper wedding attire, we did not feel out of place throughout the evening and even danced through the evening with all of them (no mean feat, considering I have 2 left/right feet). 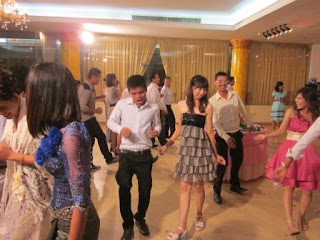 It was more than just because we were obviously not locals and were ‘excused’ in various ways. In part, I felt it was more because this is a place that does not judge so fast and so easily. The lovely bit is they do not even have to put in effort to include us; it just come so naturally to them, and always done in a very down-to-earth manner. It makes it unavoidable to compare to more cosmopolitan places (and people) which/often proclaim how open they are (but actually not quite so), thereby revealing a degree of hypocrisy.
As such, meal times with the locals are a joy - there is no need to make contrived conversations and small talk. The locals talk to one another in Khmer,  but will switch to English when they want to speak to us. That is refreshing as I am used to a culture where we try to talk common topics, common language in order to make an effort to include people (of course, unless the intention is to exclude :P). The Cambodians display no hint of any concern that they are excluding us when they talk in Khmer and their own topics, not because they are insensitive, but simply because that is natural. Else, Dawn and I are left to enjoy our meal,and how gladly we appreciate the pragmatic and down-to-nature of the culture!
Will end off the entry with a picture of the wedding invite and the 'red packets' that Dawn gallantly and creatively designed for both of us (since we would not have thought to bring red packets along with us)! 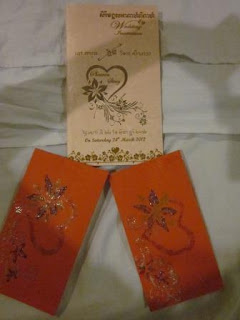 I am back in Cambodia, this time round, with a very different purpose and a different status. In this one month that I will be in Phnom Penh, my time here will be less to see the sights of a country on the cusp of heavy industrialisation tourism development. Instead, I felt greatly privileged to be able to go beneath and understand more about the inner workings of the people and the country, and it has been a humbling one week.

In a land with so much disparities, it can be pretty overwhelming to work to advance the conditions of the people, especially when one knows that there are so many forces they are working against. Hence I am very respectful of the staff at Riverkids where I am volunteering - they have such a crystal clear reality of the situation and the challenges that lie ahead of them, yet are so dogged and persistent in doing what they think they should do, if only to improve the condition of their charges, one child at a time.

Coincidentally, one of my friends in Singapore is involved in guest curating an exhibition on Cambodian photography and there are some very interesting works there, which helped me gain a greater insight into the country. Here's more about the exhibition, currently held at the Institute of Contemporary Arts Singapore, from 8 March to 1 April 2012.

He has a very comprehensive write-up here too, published previously in a magazine:

http://www.aaa.org.hk/newsletter_detail.aspx?newsletter_id=1144
Posted by Wei Teng at 10:31 No comments: