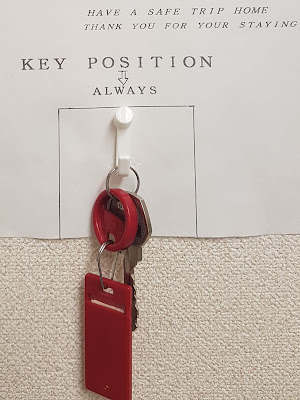 The keys rests, in a simple pen-drawn square, marking its home.
That was the first arresting image that Japan gifted me on my first day of arrival at the small room in my first air bnb accommodation.
In the second air bnb I stayed in, I took away the aesthetic lesson of gifting a vase a coaster to lean on. A few minutes after I stepped away from the dining table where I tossed on it my breakfast consisting of an egg sandwich and a plum onigiri grabbed the night before from 7-11, I returned to find that my air bnb host had artfully arranged them neatly on an elegant plate placed on a tray.
These were easy enough gestures. Yet once you took home (pun intended) the concept of gifting every object its home, the image of a vase lying barren on a wooden table without a coaster simply looks forlorn.
That is what Japan does to you.
The Japanese appears to be made up of an island of individuals who has a strong concept of home. Every object has its rightful place; thou shall never see the act of gifting an object a home an act of indulgence. Japanese lifestyle celebrity Marie Kondo, who found fame by helping people straighten up their homes (and lives as she believes), advocates it is important to have a place for everything.
Such a belief in the concept of home demands orderliness for sure, which the Japanese are well-known for. But more than that, it shows a deep respect of all things, both animate and inanimate. The Japanese has a steep tradition in viewing the everyday things of life from the perspective of relationships among people. Conferring a respect for the objects in our lives shows a respect for the users of the objects.
I didn’t realise, but such respect for even the most mundane things has rubbed off on me.
The first sign of transformation made its grand entrance at potluck meals during the Christmas festive period. I fervently made sure every dish that arrived at the table made their way from makeshift shelters of oil-stained paper bags and plastic containers to proper ceramic plates. The usual practical me would have left them as they are, believing that that is the rightful way of doing things. 1 fewer plate to wash = water and time saved.
Sayonara, my practical Singaporean habit.
I took things a tad too far when at my nephew’s birthday party, I emptied out the contents of each McDonald meal packed in paper bags and passed them out on plates and bowls to the tweens. If they do find me weird, they were respectful enough not to roll their eyes at one other.
Enough said, I needed to know what drives this strong sense of home in the Japanese. The universe somehow always has a knack for knowing what I need and blesses me with the necessary.
Two weeks after I returned from my Japan trip, I chanced upon a book aptly titled “I Want to Go Home”. Written by Wesley Leon Aroozoo, a lecturer from LASALLE College of the Arts and a filmmaker. The book adds to the jigsaw pieces, helping me better understand the Japanese’s need to ensure everything is in its place.

“I Want to Go Home” documented the author's journey meeting Mr Takamatsu who lost his wife to the tsunami during the Great East Japan earthquake on the 11th of March, 2011. “I want to go home” was the last text message that Mr Takamatsu's wife, Yuko sent him on her cell phone that fateful day. Mr Takamatsu knows Yuko is no longer alive, yet the desire to find her body and brings her back home never dimmed throughout the years. And so he learnt to dive. Since then, he has been diving every week in the sea to look for Yuko. “I felt like I could meet her one day as long as I kept diving,” he said. “I just want to bring her home.” In the course of his dives, he returned lost objects found on the sea floors to their rightful homes and owners (if they bear names). Driven initially by the desire to bring his beloved wife home from the vast ocean, Mr Takamatsu has found another purpose in life.
I chanced upon the Internet the concept of uchi-soto which apparently permeates all aspects of Japanese life, and which possibly further explains the need to find a home for all things loved. Uchi means the inside or home, and is associated with things being clean, safe and pure that they need to appreciate. On the other hand, soto refers to the outside and that is associated with things that are unfamiliar and even impure but which they need to honour.
A new friend I made recently wrote this on her IG status profile: “I want to learn to struggle in this world; yet still know my way home.”
On this New Year’s Day, may everyone finds your way home, where you belong.
Posted by Wei Teng at 15:54